The role of NSAIDs

The role of NSAIDs in the treatment of pain

The principal pharmacological characteristics of NSAIDs involve the inhibition of cyclo-oxygenase (COX) synthesis, which is the key enzyme in the conversion of arachidonic acid to prostaglandins during the course of inflammation. When tissue damage occurs, the loss of cell membrane integrity causes the release of membrane phospholipids, which, through the action of phospholipases (primarily phospholipase A2), are converted to arachidonic acid (AA), which is primarily responsible for the inflammatory cascade. Through the action of lipo-oxygenase (LOX) and cyclo-oxygenase, the following are formed from AA: leukotrienes (LT) on the one hand and prostaglandins (PG) and thromboxanes (TX) on the other. These molecules do not cause the nociceptive signal directly, but they are responsible for sensitization both in peripheral nerves and in the spinal cord. Prostaglandins act as mediators of inflammation, with a basic role in the amplification of the nociceptive signal and afferent transmission to the spinal cord.

The final outcome of the conversion pathway of AA through LOX is the formation of leukotrienes (LT) and lipoxins (LX). These play an important role in inflammation and pain, but also in other physiological situations (chemotaxis, allergies, biosynthesis of endogenous steroids, inhibition of apoptosis, modulation of vascular tone, glomerular dynamics etc.).

COX is the principal enzyme in the first two stages of synthesis from AA to the formation of prostaglandin G2 (PGG2), which in addition is the substrate on which various isomerases and synthetases act to produce prostanoids, each of which has different functions in the body, some of them linked to the tissue damage that caused the release of AA, and others associated with the physiological homeostasis of the body. Three isoforms of COX are currently recognized with different functions in the body and with regard to the effect of NSAIDs on them.

COX1 is also known as constitutive cyclo-oxygenase. It is expressed in nearly all tissues and is responsible for the production of PG, with a regulatory role in homeostasis in physiological conditions. It is especially important in the renal and coagulation systems.

COX2 also occurs physiologically in the body and the balance between the two isoforms is important in the regulation of physiological homeostasis. It is known as inducible cyclo-oxygenase and in situations of tissue damage, there is over-expression of COX2 in the area of inflammation, with high concentrations in inflammatory exudates, but high concentrations are also achieved in areas of nociceptive processing, such as the spinal cord. Which may be an explanation for its role in central sensitization and hyperalgesia, which are characteristics of pain associated with phenomena of inflammation.

It should be borne in mind that both isoforms are necessary in a healthy body and that an over-expression of both occurs in situations of inflammation and nociceptive stimulation. It has even been shown that the acute analgesic effect of NSAIDs is due to the blocking of COX2, but also to a large extent to the blocking of COX1. The development of drug products with very high specific inhibition of COX2 has been shown to have a poor safety profile. It is essential that there is a balance in the inhibition of the two isoenzymes. 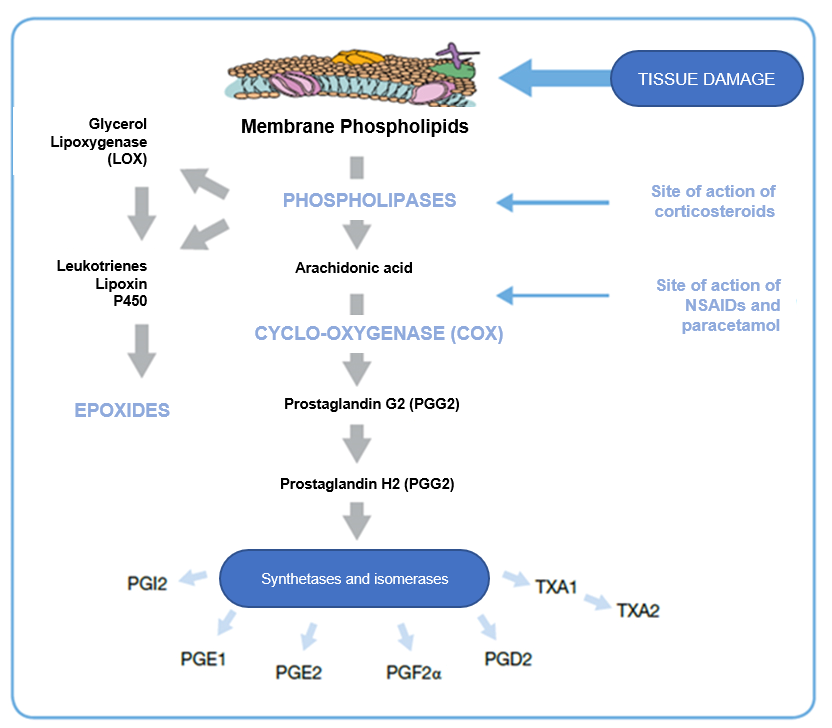 We use first and third party cookies to improve the services by analysing your browsing habits. If you continue browsing the website, you accept their installation and use as aforementioned. You may modify the settings and obtain more information in the Cookie policy Accept